The Constitution can be defined as “the genotypic inheritance of an individual,the physical make up of his body, including its functional ability, metabolic activity, reaction to stimuli and resistance to infection”. Constitution comes from the Latin word “constituere” or “constitute” which means to set up, to establish, or to make up.

Let’s see what different author say about the constitution (homeopathy): 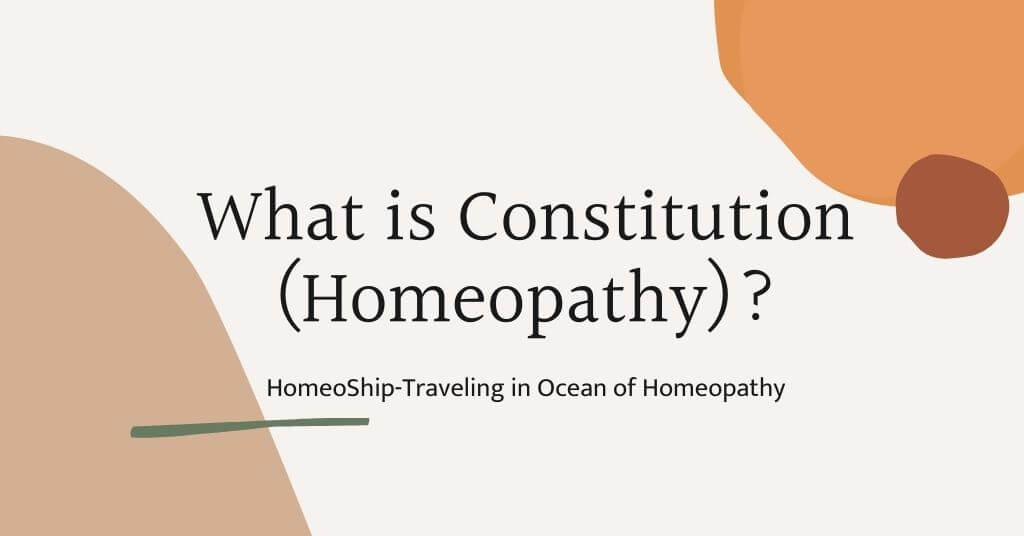 that aggregate of hereditary characters, influenced more or less by the environment which determines the individuals reaction, successful or unsuccessful, to the stress of environment

Physical constitution is the external disorder following disorder in the man, the vital force

physical constitution is the soil on which grow the idiosyncrasies, diathesis, susceptibilities, dyscracia etc

Once the baby grows and starts facing different environmental conditions like a house, school, playground, teachers, the media and friend circles, etc, their influence on him molds his behavioral and comprehending pattern either directly or indirectly.

The characters which the baby receives from his parents, we can call the endogenous factors (genetically determined) and the later given examples as the exogenous factors (environmental influences). So, it is clear that from the time of birth and throughout life, the internal and external environmental factors influence a person’s behavior. They influence the characteristics of our body as well as mind.

Hence, the man is what he has inherited from his ancestors as well as what he comes across and what he learned from his experiences in life. Some persons are liable to some miasms and some are prone to others. This selective affinity is called susceptibility.

Constitution influences susceptibility. It is very difficult to estimate how a person’s constitution develops. But constitutional diagnosis helps in treating the patient and even in selection and repetition of the doses.

Constitution in the History

Aristotle was the first person to group individuals under different headings. Galen, Bazi, Read matcher and several other ancients have tried to classify individuals in different ways. Hippocrates said that every individual has his own nature (constitution) and it is very difficult to change this nature.

According to Hippocrates, the organism becomes sick in the initial stages, the localization of the symptoms occurs only in the later stages of the disease process. This concept is more similar to the concept of disease in homeopathy.

During the process of remedy selection, a homeopath tries to individualize a patient based on his physical built, morality, social behavior, his desires, and aversions in common, etc (refer § 5). Every person inherits some characters or tendencies from his parents (endogenous or hereditary or internal) and some tendencies he acquires from his surrounding environment (exogenous or external) that constantly influences him.

So constitution is the aggregate of the external and internal characters of an individual. This chapter helps the homeopathic physician in selecting the constitutional remedy. The constitutional study is compared with physiognomy, an art of judging the character of anything by its general appearance like face, physic, etc, but the constitutional diagnosis of a person is deeper than this.

In homeopathy, the nature of the patient is judged by his temperament, heredity, predisposition, miasms, and constitutional diathesis, and the present condition of body-mind.

Dr. Leon Vannier classified constitutions into Phosphoric type, Fluoric type, and Carbonic type, etc. His classification was based on the predominance of the chemical elements in the body.

We are aware of Hahnemann’s classification of the patients into psoric, syphilitic, and psychotic types based on the miasm that affects him. But most of the homeopaths follow Dr. Von Grauvogl’s constitutional classification.

According to Grauvogl, the living organism is composed of oxygen, carbon, nitrogen, and hydrogen. The excess or deficiency of these elements in the tissues results in the development of the different constitutions.

This constitution is the result of insufficiency or inadequacy of oxygenation. It is characterized by an excess of carbon and nitrogen, insufficient oxygenation, causes deficiency disorders and perverted nutrition. Diseases develop because of the retardation or malnutrition in these types of constitutions. Tissue does not absorb sufficient oxygen or nutrition. There is a functional deficiency.

The usual symptoms found in this constitution are:

The oxygeniod constitution is characterized by an excess of oxygen or exaggerated influence of oxygen on the organism. Excessive oxygen in the system results in the breakage of hydrocarbons and nitrogen. This leads to the destruction of tissue and bones. Symptoms of the patient improve in nitrogen and carbon-rich environments.

The symptoms of Oxygenoid constitution are:

i. Oxygenoids are generally nervous individuals with great physical and mental activity.
ii. Feels better in rains or cold weather.
iii. Complaints increase at the seashore or low altitude.
iv. Appetite vigorous, even during illness.
v. Patient feels better by rest and taking food.
vi. Excessive elimination of urea and phosphates.
vii. Plethora and a great quantity of blood.
viii. Much oxygen fixed on the hemoglobin.
ix. Excessively thin patient, cachexia.
x. Animal heat is strong after meals and feeble in the intervals.
xi. Vigorous appetite that remains even during illness.
xii. Symptoms aggravate by moving from dry atmosphere to humid atmosphere.
xiii. Symptoms ameliorated by rest and food.

Excessive hydrogen is characterized in this constitution. This leads to water retention in blood and tissue.

Hahnemann noticed that each medicine in the materia medica has a different type of personality of its own. This was highly propagated by Dr. J.T.Kent as the “drug personality”. Each medicine’s peculiar personality is called the “constitutional picture of the drug” in the homeopathic field.

This method is useful in understanding the peculiarity of a person in his healthy state as well as the diseased state. This also helps in the “individualization of a person”

Constitutional diagnosis is done under 3 headings:

This method of therapeutics is unique to homeopathy. It is believed that constitutional medicine can correct the inherent and acquired defects in the personality. Well selected, deep acting homeopathic remedy is equal to the constitutional remedy.

That’s all about constitutional how it started and how it classified what to know more about temperament and diathesis and other homeopathy related terminologies and comment below or ask us @Quora.